If I fail to write a parts and year manual the next owner will be at a loss. Most is Chrysler or Ram original. The key will be knowing from what and the year.

Gustav said:
Alright, did some tests and got it - the truck runs!

First, took the coil positive, and re-routed it directly from battery positive, no ballast resistor. No dice.
But, the cranking while on ignition 1 did go away.

Then, I threw in the old coil, with the same wiring setup. Bam! started right up. Starter only engages on ignition 2.
So my brand new aftermarket coil is just...bad. That is a bummer.
But the good news is that it runs great, and it sounds good (even with open manifolds)!

So, still gotta diagnose the weird cranking condition, but at least I have some clues - and I know I didn't mess us the cam or distributor timing.

We'll see if I can get it ironed out. I still have all of the little loose ends to tie up before I can drive it. A working throttle pedal would be nice...
Click to expand...

Great you got it started, don't run it too long with the coil straight to 12v unless it's a internal resistor coil. If it's a external resistor coil like Mopar usually are you need the ballast resistor to cut down the voltage when running.

65 sporty said:
Great you got it started, don't run it too long with the coil straight to 12v unless it's a internal resistor coil. If it's a external resistor coil like Mopar usually are you need the ballast resistor to cut down the voltage when running.
Click to expand...

Yeah, I'm not planning to run it that way long term, just helped to diagnose the issue. I gotta figure out where the issue is - very strange one.
7

Here is the wiring diagram I have used for years. if not 5 pin forget about pin 3 and associated wiring. No dual ballsit will be required with the 4 pin setup.

7mopar said:
Here is the wiring diagram I have used for years. if not 5 pin forget about pin 3 and associated wiring. No dual ballsit will be required with the 4 pin setup.
Click to expand...

Thanks for uploading! Hopefully it will help deduce what's going on

Alright everybody, just wanted to provide a real quick update on the truck - I got it running and driving last month, which feels great.
Solved a bunch of little issues, too, like the tailgate not opening as one of the hinges had broken off. Also re-routed the exhaust a little bit for more clerance. Fun to practice welding.

The bad new is that it's still smoking out of the driver's side tailpipe, same as what started my whole rebuild process. Definitely coolant.
I immediately assumed that it was the head gasket, and that I had improperly gauged the flatness of the head or something. Spent about a week wondering what it could be, running through all my assembly steps in my head again, etc.

But it did run, so I dropped it off at my local mechanic/mopar mentor and he used a bore-scope and found that it was not the head gasket, but actually a valve seat that had dropped, and cracked the water jacket in the head. Coolant leaking into the exhaust port on cylinder #5. Makes me feel better that it wasn't something I did wrong! Though maybe I could have caught it if I had known what to look for, but the head gasket was in such bad shape, I assumed that was the culprit (might have also been bad).

Of course, this is bad news, haha. Because the machine shops around her don't really want to do the work to fix it (welding cast iron), and I haven't been able to find a replacement head yet. But At least it's an easy replacement, once i get my hands on one.

Anybody have one lying around?? I'd be quite happy to buy it from you. 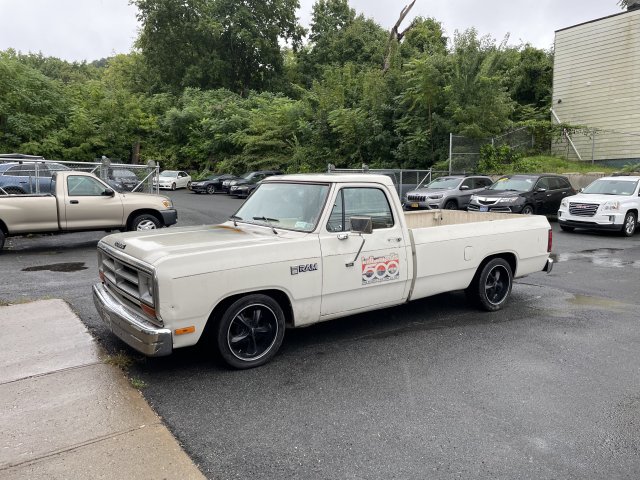 It was, at least, nice to see the truck somewhere other than my driveway
7

Your location is way to far away. I am also not sure of our small block stock. We do have an almost complete 318 in storage.

Shouldn't be too hard finding a used head or reman
Check here for used, Car-Part.com