as title says. it won't be new for sure, just new to me. It WILL be a Dodge, as I have never had anything else.
As much as Id like to find a nice "old man special" clean low mile 80s D/W 150, or (2nd choice) a 94-02 series with a Magnum 318 or 360, it isn't looking promising. living in the rust belt is the problem there. as is banks, not wanting to loan on something like that.
most likely if it happens it will be mid-2000s-mid 2010's model. It will NOT be a 4 door with stupidly short (useless) bed. Im trying to find a reg cab 8' bed, Hemi, that is not white. Talk about a needle in a haystack. I further wish I could find a truck like that with a 6 speed manual. I see lots of 2002-2012s that have more rust than my current 96 and 99 Dakotas combined. also not interested.
I have a couple in my sights, Hemi, auto. anywhere from 50-200k+ miles, looking towards the low er end of that range, I want to have something left once paid for.
I looked 2 years ago, seeing prices now I wish that if I was gonna get a newer truck, I should have done it then. could have had a 2018 with 5k miles on it, for less than I'm seeing 2013s and 2014s with 100k+ on them now.
(I didnt think they were giving me a fair deal at the time) "ST" or "tradesman" trim plenty good for me. Don't need all the frills, a waste in a work truck.

What can you guys tell me about the Hemi's? Pifalls? Gotcha's? I'm used to 318s and 360s in both LA and Magnum varieties. anything to be wary of? Common issues after certain number of miles? Certain years better than others?

I have seen older 03-06 with high miles and running strong, but I have seen 4 different Hemis, 13 and 14s with bad lifters that wiped out camshafts around the 130,000 mark.

Here is one you could fly down and drive it back

That is much more in line with what I would like to get, and I am much more familiar with a 360 than the hemi. Comparable overall miles on it vs the 2010 that I am considering.
Biggest issue? I have 3 white vehicles now, trying to get away from it for a while
and being 21 years old I do like the older ones much better but i don't have $9 grand sitting around where I could just write a check. The biggest reason I'm looking newer is that I think the bank will be more willing to help

Can't get the link to load but this truck is in PA. On Syracuse craigslist 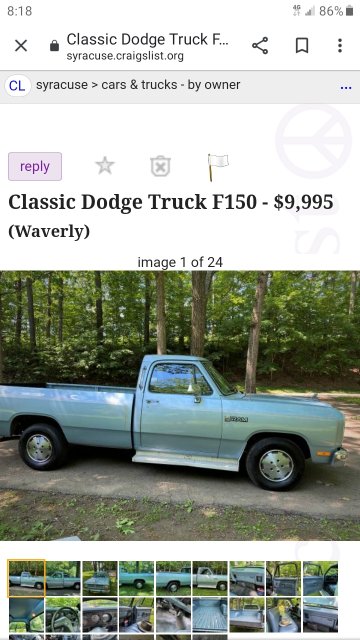 He's the rest of the ad

See if I can get the link

This beautiful truck is in a class all its own! There are no restorations done to it and is in its original finish with very minor rust and classic trim lines. It is a family owned vehicle that has...
syracuse.craigslist.org
You must log in or register to reply here.
Share:
Reddit Pinterest Tumblr WhatsApp Email Share Link
Top