Got my rig running nice (crappy engine electrical work performed by previous owner). Around town, it's great! Runs smooth, reasonably quite (the holes in the floor and lack of sound deadening make it a little louder). But, above about 50 mph, well, it wants another gear. I can't tell you the RPM since it does not, nor has it ever had a tach, but it's turning a lot of revs. It'll hit highway speeds, but hearing protection is mandatory as the poor engine screams from the RPM.

I'm trying to find the easiest and least expensive way to solve this (I'm hoping they're the same). Clearly I need to ID the trans and gear ratio. I suspect the trans is not original based on the giant hole that had been cut into the tunnel around the shifter, but it could be, the hole clearly wasn't for clearance. I assume the first step is to ID the trans and gear ratio and I could use some help with that.

Next, is there an opinion on which route is best, easiest, cheapest? I do use the rig to haul and want to make certain it's still a valuable hauler. Maybe swapping to an auto would work? I have no clue and could use some direction.

Pics of the trans will help, any tags on the diff bolts? If no tags are there you can jack up the rear end, mark a spot on the tire, rotate the tire one revolution and count the number of turns the driveshaft makes. This will give you a close guess of gear ratio, one tire revolution to four turns of the driveshaft, it's probably a 4:10. If you pull the cover and count the pinion teeth and ring gear teeth, divide the pinion into the ring gear. 41 ring gear 10 pinion=4:10
C

65 sporty said:
Pics of the trans will help, any tags on the diff bolts? If no tags are there you can jack up the rear end, mark a spot on the tire, rotate the tire one revolution and count the number of turns the driveshaft makes. This will give you a close guess of gear ratio, one tire revolution to four turns of the driveshaft, it's probably a 4:10. If you pull the cover and count the pinion teeth and ring gear teeth, divide the pinion into the ring gear. 41 ring gear 10 pinion=4:10
Click to expand...

I've got good weather coming this weekend and will work on it then. I should be working on the rust issues, but this is less intimidating for me.
7

Tunnel should be removable if this was truly an original manual truck.
7

The previous owner did say it was Dana 70, but I'll check tomorrow. I have to imagine that running 4:10s wouldn't hurt my hauling capacity to any great extent.

I don't 'think' the tunnel was removable originally. When I got it, the area of the tunnel around the shifter was held in place with about 3 tack welds across a wide gap left by a plasma cutter. As a truly terrible body person, I managed to screw and seam seal some sheet metal (prepped with paint and undercoating [except where the seam seal went]) over the large hole left for who knows what reason. All that to say, I don't think the tunnel was intended to be removable, but it kinda is now.

A friend suggested just going to a taller tire might do the trick. I do need to replace the antique bias ply tires that are on the 16.5 rims anyway. I picked up a full set of 16s and maybe putting some 235/85 s on them might solve the problem.

But, again, it would be smarter for me to start grinding on the rust. Of course, planning ahead never hurt!
7

Is that tunnel wide and flat on top or skinny and rounded. I know the 74 model had a removable top loader tunnel cover. Spanned from just in front of the seat to a few inches beyond the seam in the floor. Not sure when that changed. Wish my 82 had it as it makes transmission work so much easier. My 9.50 - 16.5 tires are 31 inches tall and I have the same problem you do.
I will eventually be going the 518 route. My manual trans went bye-bye with the slant 6.
7 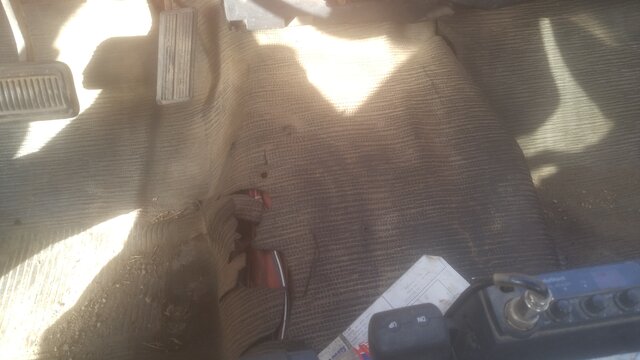 Here is a picture of my manual trans tunnel. It is 15 inches at its widest point.
C

7mopar said:
View attachment 17430 Here is a picture of my manual trans tunnel. It is 15 inches at its widest point.
Click to expand...

The first thing I notice is the lack of a gear shifter sticking through your tunnel. Mine is flatish around the area of the stick, but then rounds out as it goes towards the seat.
C

Here's a photo of the trans. My neighbor borrowed the truck to pick up a load of sand this morning so it's riding a little low in the back to get to the back side of the rear end. I'll inspect that later. 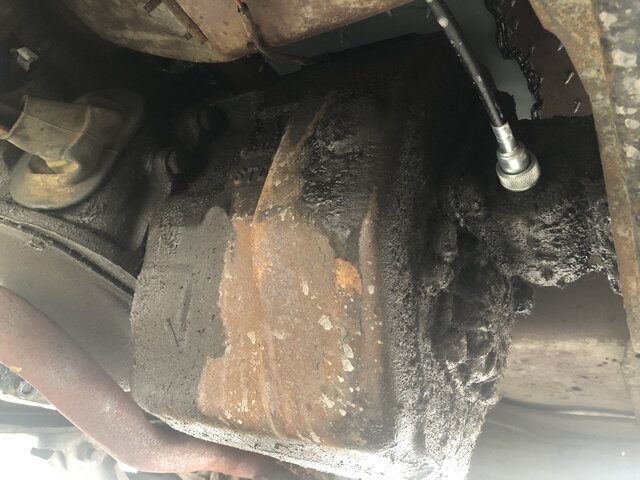 charm said:
The first thing I notice is the lack of a gear shifter sticking through your tunnel. Mine is flatish around the area of the stick, but then rounds out as it goes towards the seat.
Click to expand...

-Guess you missed the part about the manual trans going bye-bye. During the last phase of rebuild some how the truck grew from a D150 to a D350 with a commercial frame. At that time it lost the 79 - 360 and long tail shaft 727 and gained a 89 - 360 with a short tail shaft 727. The truck is in its fourth configuration. The trans tunnel stays flat all the way to the seat.
C

I did miss that part! Guessing that the removable trans tunnel was short lived and didn't make it to 75.

Thoughts on what that trans is?

Having converted to a 1 ton, how does the 727 do both with hauling heavy loads (3 or 4 yards of sand this morning) and how does it down on the highway?

Still need to look for the tag on the rear end. Then I'll count revolutions if it's not there and see what's what. Sounds like the gearing is 4:56, but it'll be good to make sure.
7

The 727 is the short shaft heavy duty truck trans. It was completely rebuilt and installed with the 89 - 360. It has caused no problems and will handle any load the 360 will. I have crossed the scales with it and trailer at 17800 lbs. The gas 360 is the weak link.

Not sure if one of the diesel or V10 manuals with OD will bolt directly to your bellhousing or not. But that is what I would start looking for.
A

That NP435 is a HD 1:1 final drive trans, with, as you have found out, an extremely low non-synchronized first gear. That is a grain-truck trans, suitable for hauling heavy loads over soft dirt fields.
However, the other gears are not that bad and, the 1/1 final is the same as any other manual trans you might install.
So, while it is not a performance trans, it is not contributing to your buzzzzzzzzzzzzzzz. That would be the grain-truck rear gear ratio,lol.
The A727 automatic will run about 5 to 8, possibly 10% more rpm with no other changes.
The A518 is a natural for you, with it's .69 overdrive ratio, bringing your rpm down by 31% or guessing 800 to 900 rpm. This is IMO the best solution, allowing you to keep whatever ratio is back there, so not in any way affecting your ability to haul stuff .
But it won't be the cheapest.
But your empty fuel mileage will be better.
The early model A518s were hydraulically and automatically controlled overdrives. But you did have the option of locking it out with an extra position on the gearshift selector. I guess you would need the matching column to use that feature.
Last edited: May 25, 2020
7

Just a simple on off switch will lock the OD in or out. Other than making a new front half to the two piece drive shaft, modifying a trans mount and getting what is needed to make the OD work right when on every thing is sitting waiting for the right time. I am not planning on cutting up any of the original parts for the 727 just in case for some reason it needs to go back in.
You must log in or register to reply here.
Share:
Reddit Pinterest Tumblr WhatsApp Email Link
Top